Conflict of interest in psychology? Targeted individuals and mental health: CVE programs and dubious intentions; even more dubious results.
Those who experience the quasi legal, and often illegal interactions targeted at them by intelligence agencies, law enforcement and the wide net of affiliated community groups that perpetrate organized gang stalking, such as the LEIU’s,  are often left debilitated, as the goals of OGS are stated in multiple blogs and videos online, and even Urban Dictionary is aware of these campaigns: they seek to destroy individuals.
Urban Dictionary has a list of the activities that TI’s are subjected to, but there are many more descriptions in the less than academic online discussion communities. One theme is certain to come up:  OGS seeks to destroy relationships or exploit them, isolate individuals, demolish and demoralize individuals and leave them broken and homeless.
Programs like the FBI’s Countering Violent Extremism, or CVE program,  enlists psychologists, social workers, teachers, homeless shelter advocates, and many more community members in the stalking, and harassment that a targeted individual experiences, and the TI has little to no chance of privacy, or the ability to recuperate from the stated goals of OGS. They literally have nowhere to run as they are filleted by this mechanism.
Let’s take a look at what a TI experiences as they are pressured or recruited by an FBI informant- and keep in mind that it is not just Muslim’s who are being targeted, but also that every law enforcement agency has versions of their own programs, targeting trailer park kids and south Central teenagers in other crime creation or infiltration schemes, as the FBI CVE is just the template for a wider range of community policing programs. And, as noted elsewhere in my blog, religious organizations and cults, community groups and others use these tactics too, though the purposes vary, the effect is often the same.
From the Intercept:

First, they target a Muslim[see my note above]: not due to any evidence of intent or capability to engage in terrorism, but rather for the “radical” political views he expresses. In most cases, the Muslim targeted by the FBI is a very young (late teens, early 20s), adrift, unemployed loner who has shown no signs of mastering basic life functions, let alone carrying out a serious terror attack, and has no known involvement with actual terrorist groups.
They then find another Muslim who is highly motivated to help disrupt a “terror plot”: either because they’re being paid substantial sums of money by the FBI or because (as appears to be the case here) they are charged with some unrelated crime and are desperate to please the FBI in exchange for leniency (or both). The FBI then gives the informant a detailed attack plan, and sometimes even the money and other instruments to carry it out, and the informant then shares all of that with the target. Typically, the informant also induces, lures, cajoles, and persuades the target to agree to carry out the FBI-designed plot. In some instances where the target refuses to go along, they have their informant offer huge cash inducements to the impoverished target.
Once they finally get the target to agree, the FBI swoops in at the last minute, arrests the target, issues a press release praising themselves for disrupting a dangerous attack (which it conceived of, funded, and recruited the operatives for), and the DOJ and federal judges send their target to prison for years or even decades (where they are kept in special GITMO-like units). Subservient U.S. courts uphold the charges by applying such a broad and permissive interpretation of “entrapment” that it could almost never be successfully invoked.

Once again, we should all pause for a moment to thank the brave men and women of the FBI for saving us from their own terror plots. 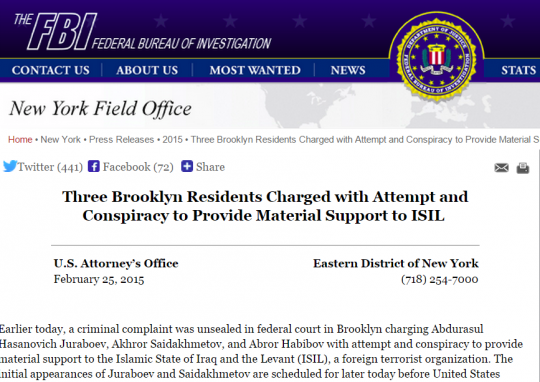 One can, if one really wishes, debate whether the FBI should be engaging in such behavior. For reasons I and many others have repeatedly argued, these cases are unjust in the extreme: a form of pre-emptory prosecution where vulnerable individuals are targeted and manipulated not for any criminal acts they have committed but rather for the bad political views they have expressed. They end up sending young people to prison for decades for “crimes” which even their sentencing judges acknowledge they never would have seriously considered, let alone committed, in the absence of FBI trickery. It’s hard to imagine anyone thinking this is a justifiable tactic, but I’m certain there are people who believe that. Let’s leave that question to the side for the moment in favor of a different issue.

So, psychologists in the very least are diagnosing shadows if they are unaware of these types of programs, and doing a great dis-service to psychology, and to the narrative or proper care of TI’s.
These programs incentivize psychology to act as informants themselves, and to report to the authorities the state of mind and mental health of an individual who does not even know who the hidden secret people and groups.In other words, psychology is truly “in on it,” as we have never seen before.
Especially troubling is how one of the leading privacy rape advocates in America, Senator Dianne Feinstein(who  benefits from a $600 million in government/military contract), correlated child pornography with terrorism, and used that as a tool whereby she could pry away patient-therapist privilege.Where once targeted persons and others had the protection of patient-psychologist privilege, today, the agencies have stripped even that. and, in one eerie reminder of past CIA and psychiatry collusion, we now see that California psychologists are mandated to report patients who “use” child pornography, when in fact the agencies distribute it, and likely use it in terrorist recruitment programs in classic compromise operations. As Bruce Schneier has noted, it is likely there is more to the story of terrorists and bad guys and child porn, because hiding secret messages in cp is like “smugglers hiding kilos of cocaine in bales of marijuana.”
There is literally nowhere to hide from this form of institutional abuse, and mis-diagnoses brings back the reminders of the Soviet era and Stalin’s punitive psychology. Agency collusion to undermine victims of government abuses is startlingly similar to earlier era’s of experimentation on citizens.And, because this is a ‘cutting edge’ issue, and fairly new to psychology and criminal defense attorney’s, historical perspective is important, as we know from the past the agencies distribute drugs, and even assassinate people. But few historical examples are better than the story of Pulitzer Prize winning journalist Gary Webb, who first revealed the CIA’s drug running in the US in his expose'”Dark Alliance.”
But whatever you, the reader decides, don’t shoot the messenger-or call them crazy.
Related: Academic says that the governments are distributing child pornography and using terrorism as stalking horses to destroy privacy rights.