Let’s analyze the false narrative of “women and children” that right and left wing moralists drop into the strangest places whenever it suits their purposes (or suits their bankster allies pocketbooks). The schadenfreude is most striking when it comes from a modern Saint, Saint George Bush, Jr.:

George: your NWO Masonic Confabulaion, and the Jewish-Kristian Kapital Konquests that followed have claimed many “wimmins and chillrens” lives-and your holy war that birthed all of its horrible domestic surveillance capitalism into our lives are claiming more victims by the day.

Didn’t anyone ever tell you that true believers only need the faith of a poppy seed?-and that creating the huge  FVEYs spying monstrosity belies a fundamental(ist) lack of faith in your own Lawd and Savoir faire?

Oh, never mind…I am just one of that wars living casualties, and hey, thanks for that gang stalking program that you, Dick, and Don, Binny and Rienhold Niehbuhr cooked up, its a real Texas sized nightmare.

How many “women and girls” died in the Iraq invasion, and in Pakistanistan, and yeah, Afghanistan during your horrible tenure as number 33?

How many LIVED with what you did to them?

Related Story: From a recent headline related to the Great Gaza Landgrab, we see this: “This week’s violence has killed 119 Palestinians, including 31 children, 19 women, and wounded 830 people in the impoverished territory. Israeli airstrikes have pounded apartments, blown up cars and toppled buildings.”

From Consortium News, a good question for you, in the form of a two part series:

How Many Millions of People Have Been Killed in America’s Post-9/11 Wars? – Part One: Iraq

The numbers of casualties of U.S. wars since Sept. 11, 2001 have largely gone uncounted, but coming to terms with the true scale of the crimes committed remains an urgent moral, political and legal imperative, argues Nicolas J.S. Davies.

How many people have been killed in America’s post-9/11 wars? I have been researching and writing about that question since soon after the U.S. launched these wars, which it has tried to justify as a response to terrorist crimes that killed 2,996 people in the U.S. on September 11th 2001. 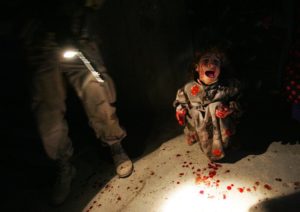 Samar Hassan screams with the blood of her parents on her own hands after her parents were killed by U.S. soldiers in Iraq in 2005

But no crime, however horrific, can justify wars on countries and people who were not responsible for the crime committed, as former Nuremberg prosecutor Ben Ferencz patiently explained to NPR at the time.

“The Iraq Death Toll 15 Years After the U.S. Invasion” which I co-wrote with Medea Benjamin, estimates the death toll in Iraq as accurately and as honestly as we can in March 2018.  Our estimate is that about 2.4 million people have probably been killed in Iraq as a result of the historic act of aggression committed by the U.S. and U.K. in 2003.  In this report, I will explain in greater detail how we arrived at that estimate and provide some historical context.  In Part 2 of this report, I will make a similar up-to-date estimate of how many people have been killed in America’s other post-9/11 wars.

I explored these same questions in Chapter 7 of my book, Blood On Our Hands: the American Invasion and Destruction of Iraq, and in previous articles, from “Burying the Lancet Report… and the Children” in 2005 to “Playing Games With War Deaths” in 2016.

In each of those accounts, I explained that estimates of war deaths regularly published by UN agencies, monitoring groups and the media are nearly all based on fragmentary “passive reporting,” not on comprehensive mortality studies.

Of the countries where the U.S. and its allies have been waging war since 2001, Iraq is the only country where epidemiologists have conducted mortality studies based on the best practices that they have developed and used in other war zones (like Angola, Bosnia, the Democratic Republic of Congo, Guatemala, Kosovo, Rwanda, Sudan and Uganda).  In all these countries, as in Iraq, the results of comprehensive epidemiological studies revealed between 5 and 20 times more deaths than previously published figures based on passive reporting.

George, stop kidding yourself with that selective morality. Normal, sane, moral people just dont buy what you are selling anymore.