New Mexico, William Atchison, school shooting, active shooter, on the FBI radar
Google has 10, 600 results for the phrases “gang stalking” and “New Mexico.” Here is one comment from a forum about OGS in Alamogordo New Mexico. Notice that “corrupt cops” are implicated, and that sex trafficking ( a major source of federal dollars that flow to the states) is implicated:

human traffick cop wrote:
The crooked police assist the gang stalkers by alerting them when they have been called, sending corrupt cops to the scene, routing the caller of emergency to the hospital to have them falsely labled as delusional……the gang stalkers also get assistance by the hospital staff that sneak the girl in for treatment because the gang stalkers keep beating them profusely also they transport the girls to various locked areas assisted by the security that work at the hospitals allowing the gang bangers to beat the girls and force them chemical to induce death everybody gets paid from the insurance fraud off of this so they ignore the screams thinking about the money they will collect Many calls for insurance money are made from the hospital staff and homeless shelter staff.

Related Story: Spy Games-how Spooks Infiltrate Online games, and how “white knights” funded by Britain’s GCHQ and sharing information with the FBI hide behind video gaming platforms to manipulate and bully young boys; and some of those who  become mass shooters like William Atchison, who was “privacy raped” before his rampage.
For comparison, note that I recently spoke with an actual targeted individual recently who has hired a private investigator to attempt to re-coup his losses after he was gang stalked. And, get out the ROGS BINGO card in these cases, because gang stalking is real, it crosses all “norms” of society and morality, and it works from within, and from outside of official institutions. As I say repeatedly, each case of OGS is itself a civil or criminal conspiracy from WITHIN official capacities.

Community policing, aka, high policing, aka “insanity and institutional sociopathy”: its what ATAP calls “the parallel colluding invedtigation. ”

The oft-repeated phrase “the definition of insanity is doing the same thing over and over and expecting different results,” appears in pop psychology, group  therapy, Alcoholics Anonymous, and many other places, so much so that it is a “truism” that is well known by most people.

That is to say that “community policing” looks like pure insanity and institutional sociopathy to most people who do not derive their income from the high heeled policing schemes of the DVIC, the PIC, and the MIC in any number of “make work” projects ranging from statistical manipulation in domestic violence cases, to enticing/entrapping/ensnaring/ framing people with drugs after long-term and actual conspiracies against their privacy, to outright creating mass shooters from scratch,with a pretext that the use of pure speech is itself an indicator of crime-that “beliefs” and “talking sh!t” are themselves criminal
This is feminist jurisprudence, because ONLY males are criminalized at any level. Or, high heels policing.
And, it cannot be denied that there is indeed a well orchestrated crisis PR narrative that seeks to push policy that eradicates Constitutional rights and guarantees, ranging from SESTA and now it’s newly morphed acronym of SOPRA (as in “Oprah”) and the first amendment, to pornography and the rights of privacy, to the second amendment and gun control via propaganda initiatives that use people to drive these policies.

In the case of mass shooters, we see time and again, that  “suspects” are “on the radar” for days, months years and DECADES of time by any of a number of sooper seekrit agincies. Well-William Atchison was “on the radar” of the FBI for an entire year BEFORE he even bought a gun, or went on a rampage.And lie a pedophile meets a child, or a rapist meets a victim, they met Atchison in secret, at the seat of his privacy: he was playing a video game from his parents home.
He was “in the privacy of his own home” when as-yet to be named psychological profilers, behavioral analysts, and hidden internet operators disguised as gamer’s began to manipulate his mind and his choices.
Then, without a doubt, we can infer that his internet became interesting, his emails were hacked, he was followed, and security theater took place around him. Because gang stalking-and CVE programs- are a full spectrum domination of an individual.
In  other words- this is a pattern in most cases where “active shooters” are, SOMEHOW created. And, then their web presence is carefully filtered before the media. Notice that in the “official presentation” of the shooter’s “intents” that several things are missing 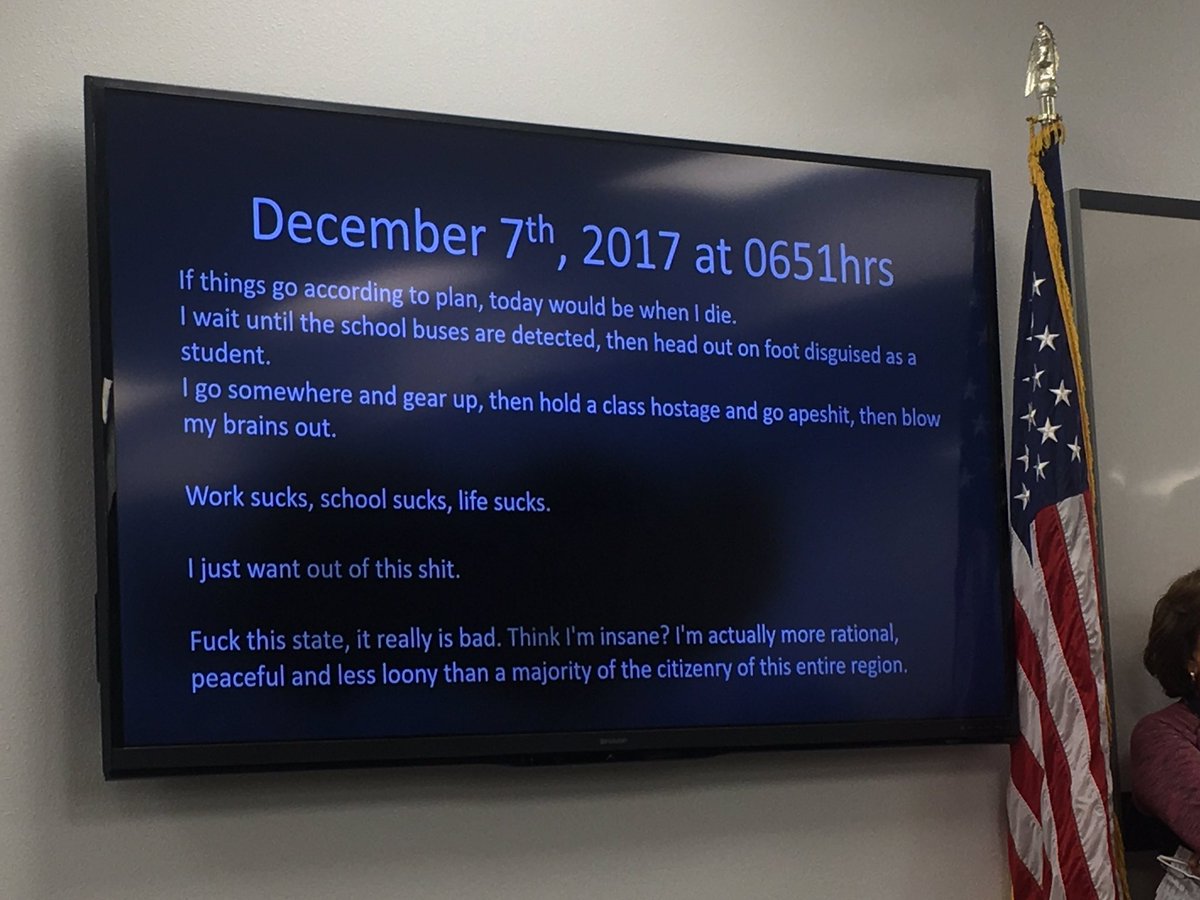 So-if the policy of policing is to stop mass shooters, then we see time and time agan that whhatever “they” are doing online ISN’T WORKING. Or: what “they” are doing is insane. But no one wants to say it out loud, because-you guessed it-then YOU become targeted, stalked and harassed; and possibly murdered in one of these institutionally sociopathic events.
The disease is idiopathic, but the effect is ideological: gun control is without a doubt at the center of these events, as we see the link between Rotary Clubs, domestic violence moneypots, gun control and white knights who “stalk the stalkers.”And, the ideological ink is that the FBI shares/outsources it’s dirty work to JTRIG/GCHQ, Britain’s agencies-because while Britain is relatively gun free, and then all of this gets “web scrubbed” afterwards.
Perception Management online, targeted individuals, and Crisis PR planning that precedes mass shooter events
What goes on in the minds of people who are bullied and harassed in their communities before they go on a rampage, or commit suicide, or otherwise create havoc? Here’s what was on the mind of Wiliam Atchison, who was “on the radar” of the FBI and presumably local law enforcement, before he decided to bu guns, “plan” a mass killing, and then, killed two and wounded many more innocent students in New Mexico on December 7th, 2017 (Pearl Harbor Day).
I have highlighted the relevant portion that indicts the social cancer that is America’s devolving two-tiered society of intolerance that has been created by Israelified police forces that work from within secret societies and cults and religious-sectarian frameworks to “incite” individuals into conformity, aka “organized gang stalking”
From Heavy.com Five things you need to know about William Atchison, the New Mexico school shooter:

Work suck, school sucks, life sucks.
I just want out of this sh**.
F*** this state, it really is bad. Think I’m insane? I’m actually more rational, peaceful and less loony than a majority of the citizenry of this entire region.

William Atchison: 5 Fast Facts You Need to Know
All over ROGS here, you will find my critique of modern “community policing,” and Red Squads, and their accompanying Hydra’s of the Panoptical total surveillance state. At any given time, this monstrosity has 17 investigative agencies, five other nations and Israel, and battalions of hidden internet operators ready, willing and able to point their venom, tribal-religious invectives and disguised provocations at single individuals who stand out in some way.
Indeed, as is often repeated online, single women are highly targeted by gang stalking, and frequently, accusations of prostitution or actual prostitution are involved. But when t comes to males that stand out, it is “violence” or “potential violence” that is used as a pretext to target them, individually, in attempts to provoke them.
The cowardly and scurrilous nature of total surveillance states then, hides its bullying and slander behind official purposes, and as such, like cancer, it grows and metastasizes until it becomes synonymous with the host organism itself-and then dies.