This, below, is a picture of a dead man who looks like he is still alive. In order to fully understand the nature of the deviant minds of organized gang stalkers, keep this guy in mind. His name was Jeremy Bentham, and his gift to the world was designing the concept of one big prison, where prisoners would be under 24/7/365 surveillance.Oh, and he was an advocate for freedom of expression-his own. 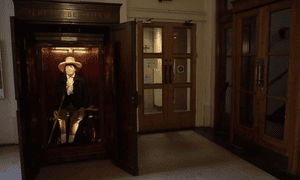 These people are truly sick individuals, and very very dangerous too.This guy wanted to live forever, and in his mind, the corpse in the glass box picture above is “forever.” He got his Panopticon alright.It’s called the surveillance state.

The Panopticon is a type of institutional building designed by the English philosopher and social theorist Jeremy Bentham in the late 18th century. The concept of the design is to allow all (pan-) inmates of an institution to be observed (-opticon) by a single watchman without the inmates being able to tell whether or not they are being watched. Although it is physically impossible for the single watchman to observe all cells at once, the fact that the inmates cannot know when they are being watched means that all inmates must act as though they are watched at all times, effectively controlling their own behaviour constantly. The name is also a reference to Panoptes from Greek mythology; he was a giant with a hundred eyes and thus was known to be a very effective watchman. https://en.wikipedia.org/wiki/Panopticon

To understand the contradictions in the minds of these people is a long and unrewarding task, and so I advise you to study how to make a spear from common wood, or metal, and then, jam it firmly in the center of the eye of this monstrosity. Then, run like hell.
Bentham was on one hand an advocate for individual liberty, and on the other, recommending this monstrosity. Such is the contrast between people who live in bubbles, and those of us down here in the real world.Freedom of expression anyone?
From the Guardian UK:
“Bentham was regarded as the founder of utilitarianism and a leading advocate of the separation of church and state, freedom of expression and individual legal rights. And now, from beyond the grave, his cadaver contains a webcam that records the movements of its spectators and broadcasts them live online, part of UCL’s PanoptiCam project which tests, amonst other things, surveillance algorithms.”
And:

As a work of architecture, the panopticon allows a watchman to observe occupants without the occupants knowing whether or not they are being watched. As a metaphor, the panopticon was commandeered in the latter half of the 20th century as a way to trace the surveillance tendencies of disciplinarian societies. Is it still a useful way to think about surveillance in an age of NSA and GCHQ?
The basic setup of Bentham’s panopticon is this: there is a central tower surrounded by cells. In the central tower is the watchman. In the cells are prisoners – or workers, or children, depending on the use of the building. The tower shines bright light so that the watchman is able to see everyone in the cells. The people in the cells, however, aren’t able to see the watchman, and therefore have to assume that they are always under observation.