Anyone who reads the ROGS blog here knows that I avoid the psychobabble and focus on what is real, can be verified, and is scientifically “provable.” And most claims of DEW’s etc are just a waste of time, until…the main stream news talks about them, and all of the sheeple start to stir around in the pen.
<strong

>Related Ideas: The scientific method is how scientists “prove” things. Here are the steps of the scientific method that you can follow to prove who you gang stalkers are. Hint: its nearly ALWAYS police, firefighters, and public sector employees, and public sector unionists at the center of it, as we see in the most famous case of “Rick Krlich meets the DickWitts of Hubbard, Ohio”, which was a real estate related gang stalking that was covered on prime time tv.

But like I said- many of the OGS dialogues are also spies and intelligence people, retired cops and military types, as well as public sector employees and their family members and affilliates, using the dialectic to cross talk, and otherwise signal to each other online. And some of them are pure criminal minded scumbags, as we see in this cautionary tale, entitled “DONT BE A DICKWITT!” which I wrote for all of the public servants who are actual gang stalkers.
These types generally use the terms “directed energy weapons,” and “sonic blasts” and a host of other coded jargon to discuss things like:
* parking their car up the block grom a targets house, and rumbling the engine all night
* fire trucks rolling by a targets house, and blasting the horn (yeah, really, how many fires are in your town anyways?)
* gossip and whisper campaigns
* many variations of loud noises targeted at a person, ranging from music blasts from passing cars, to loud noises in the night (which Rick Krlich successfully documented)
*etc.
But that “local” stalking aside, lets take,a look at how spies, and para-military private contractors,(aka “mercenaries”) use other types of sounds.
Look- they (whoever “they” are) ARE using sound weapons, and even the FBI and MI5 have travelled to Cuba to take a look (and any researcher of OGS will note the many details that concur with OGS complainants, such as that the attacks “come at night,” and “cause memory loss/brain damage/hearing problems, and so on).
I wonder- is NOW the time I should talk about that one Russian satellite that routinely flies above my house? Aw, never mind. I don’t want you folks to think I am “caAAAArrrrAAAAaaazy”:

Mystery of sonic weapon attacks at US embassy in Cuba deepens

The blaring, grinding noise jolted the American diplomat from his bed in a Havana hotel. He moved just a few feet, and there was silence. He climbed back into bed. Inexplicably, the agonizing sound hit him again. It was as if he’d walked through some invisible wall cutting straight through his room. 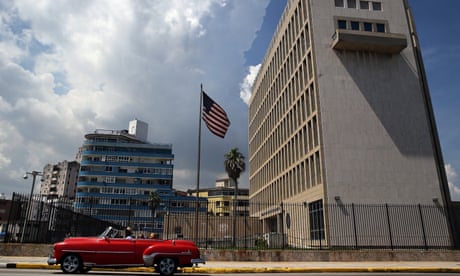 Soon came the hearing loss, and the speech problems, symptoms both similar and altogether different from others among at least 21 US victims in an astonishing international mystery still unfolding in Cuba. The top US diplomat has called them “health attacks”.
New details learned by the Associated Press indicate at least some of the incidents were confined to specific rooms or even parts of rooms with laser-like specificity, baffling US officials who say the facts and the physics don’t add up.
“None of this has a reasonable explanation,” said Fulton Armstrong, a former CIA official who served in Havana long before America re-opened an embassy there. “It’s just mystery after mystery after mystery.”
Suspicion initially focused on a sonic weapon, and on the Cubans. Yet the diagnosis of mild brain injury, considered unlikely to result from sound, has confounded the FBI, the state department and US intelligence agencies involved in the investigation.
Some victims now have problems concentrating or recalling specific words, several officials said, the latest signs of more serious damage than the US government initially realized. The United States first acknowledged the attacks in August – nine months after symptoms were first reported.
The Trump administration still hasn’t identified a culprit or a device to explain the attacks, according to interviews with more than a dozen current and former US officials, Cuban officials and others briefed on the investigation. Most weren’t authorized to discuss the probe and demanded anonymity.

In fact, almost nothing about what went down in Havana is clear. Investigators have tested several theories about an intentional attack: by Cuba’s government, a rogue faction of its security forces, a third country like Russia or some combination thereof. Yet they’ve left open the possibility an advanced espionage operation went horribly awry, or that some other, less nefarious explanation is to blame.
Aside from their homes, officials said Americans were attacked in at least one hotel, a fact not previously disclosed. An incident occurred on an upper floor of the recently renovated Hotel Capri, a 60-year-old concrete tower steps from the Malecon, Havana’s iconic, waterside promenade.
The cases vary deeply: different symptoms, different recollections of what happened.
In several episodes recounted by US officials, victims knew it was happening in real time, and there were strong indications of a sonic attack.
Some felt vibrations, and heard sounds – loud ringing or a high-pitch chirping similar to crickets or cicadas. Others heard the grinding noise. Some victims awoke with ringing in their ears and fumbled for their alarm clocks, only to discover the ringing stopped when they moved away from their beds.
The attacks seemed to come at night. Several victims reported they came in minute-long bursts.

Sooooo, here we go again, for my many readers (especially my new readers in Israel and Malta): what TI’s have been saying all along is now a REALITY, cuz’ the MSM said so. Tell me again about how TIs are crazy, Dr.’s Sheridan, James, et al? But, um, yeah. It’s very real.