The “problem is not police training, police diversity, or police methods. The problem is the dramatic and unprecedented expansion and intensity of policing in the last forty years, a fundamental shift in the role of police in society.” according to Alex S. Vitale, professor of sociology a Brooklyn College, and a contributor to America’s oldest print journal, the Nation Magazine.

In gray area policing, there are no good guys or bad guys anymore. The problem is policing itself.

You, the reader, might have noticed that I frequently reference “gray area policing,” in the “darkness” which is not only a frequently repeated meme on nearly ALL blogs about OGS, but also, in the wider society and “community policing” which is where organized gang stalking takes place.
The key element that defines a “police state” is “secret policing,” and all of the hidden processes and tactics and methods that are used “in darkness,” and those who complain of OGS  are part of the the experiment in unconstitutional policing.
From the NSA/DHS/CIA/FBI/LEO, and the FiveEyes data theft pipeline that has cast a net across our entire online and cell phone and computer and emails, to the increase in homicides of activists and dissenters; to a state of affairs where secret laws and secret courts, and secret proceeding have replaced jury trials- gray area poling has a clear name, and every dictionary of American English has a name for it- search this language, below:

:a political unit characterized by repressive governmental control of political, economic, and social life usually by an arbitrary exercise of power by police and especially secret police in place of regular operation of administrative and judicial organs of the government according to publicly known legal procedures
– Merriam Websters Dictionary online

Hopefully, sociologists and psychologists, as well as civil litigators and criminal defense lawyers will find the ROGS blog helpful when they/you encounter “targeted individuals of organized gang stalking.” You will note I have a guide for lawyers at the top of this blog; and several pages for how to document elements of OGS; and within I have many stories and anecdotal evidence you can yous to build a case, or defend a victim of OGS.
I have written ROGS from a variety of perspectives, and utilized information in a cross-disciplinary approach, which seems to me to be the correct approach, because claims of OGS take place in an environment where society at large is generally unaware of the practice, and where this causes a specific form of of social anomie where we no longer live in a “civil rights, civil procedure, and civil law based” society, but rather, we clearly and undeniably live in what is a “police state” by the very definition of that term.
Related Reading: Trump Already Has a Wall– It’s Called the Thin Blue Line
And this isn’t my opinion alone, as many have noted, and that any rational or reasonable person can infer from the state of affairs where the NSA has literally wiretapped our entire nation, targeted the communications of select citizens for decades, and then, widened the net, and disseminated this information to 17 US intelligence agencies alone, who are trickling that data across databases as I write this; and worse, US LEO’s are distributing our data to foreign interests and non-governmental organizations after that.
Alex s. Vitale teaches sociology to police officers and civilians alike, and so, he has undoubtedly met several thousand of those who are eventually tasked with participation in the police state, and who themselves might one day develop an actual conscience, or humanity, or even morality, and question the current state of gray area policing. But for now, there appears to be no end in sight of the endless growth of repression across America, or an end to the Israelification/militarization of the police.
Vitale’s book is set for official release in October 2017, but it is already available on  Amazon.com.

How the police endanger us and why we need to find an alternative
Recent years have seen an explosion of protest and concern about police brutality and repression—especially after long-held grievances in Ferguson, Missouri, erupted in months of violent protest following the police killing of Brown. Much of the conversation has focused on calls for enhancing police accountability, increasing police diversity, improving police training, and emphasizing community policing. Unfortunately, none of these is likely to produce results, because they fail to get at the core of the problem. The problem is policing itself—the dramatic expansion of the police role over the last forty years. 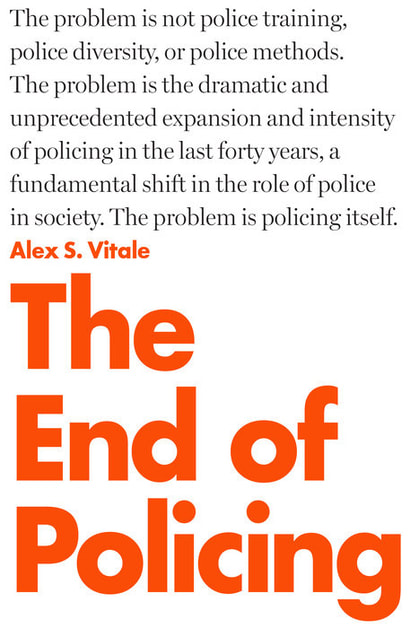 “In a tightly constructed monograph filled with reform suggestions, Vitale decries the evolution of police agencies as tools of the white establishment to suppress dissatisfaction among the have-nots. The author understands the role of police in trying to solve violent crimes such as rapes and homicides, but he believes police should no longer serve as the chief combatants against narcotics use, street gangs, border patrol, prostitution between consenting adults, homelessness, mental illness, and misbehaving adolescents. Instead, Vitale suggests either decriminalization of certain behaviors or non–law enforcement solutions, such as government agencies and private organizations that could, for example, work with the homeless to provide them with permanent shelter. A clearly argued, sure-to-be-controversial book.”

Alex S. Vitale is a professor of sociology at Brooklyn College and the author of The End of Policing, forthcoming from Verso Books. He is senior adviser to the Police Reform Organizing Project and serves on the New York State Advisory Committee to the US Civil Right Commission.